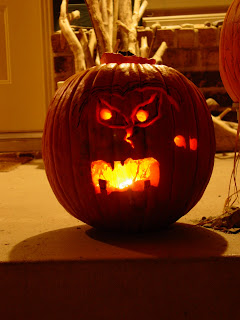 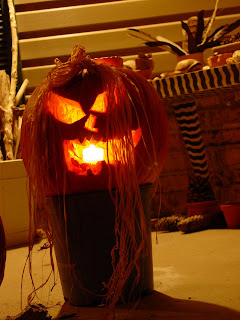 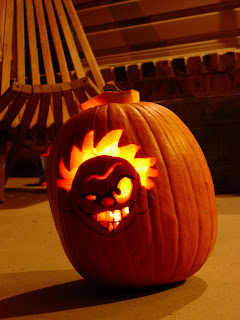 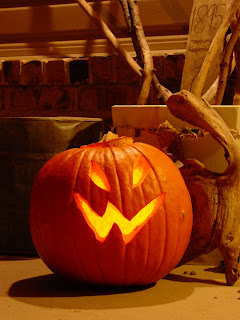 During our annual Beggars’ Night candy giveaway, we had praises for the kids’ pumpkins. I think the kids’ pumpkins always look good, but never knew that any strangers agreed. We several people comment on them tonight.

Des Moines’ Trick or Treat night, Beggars’ Night, is a fun time. Since I grew up in the area, I thought everyone had to tell jokes before getting their candy. After discussing this practice on a homeschool email loop (can’t remember which one), I learned that it is not custom for most places. The Des Moines Register, the daily newspaper here, ran a story on it today. I’ll put some of it here; the entire article can be found here.

In most places, the Halloween tradition goes like this: The kid says, “Trick-or-treat.” The homeowner gives him candy.

In Des Moines and surrounding suburbs, it’s more like this: The kid says, “Trick or treat.” The homeowner says “What’s your trick?” Then the kid tells a joke of the sort usually found on Bazooka gum wrappers.

There may be children elsewhere in the world who follow this unusual practice, but if so, anthropologist Ken Erickson has never run across them. Erickson directs the Center for Ethnographic Research at the University of Missouri.

“That is totally cool,” said Erickson, who has conducted research on Halloween customs in the United States. “I never heard of that before. That is totally fun.”

In the 1990 book “Halloween: An American Holiday, an American History,” author Lesley Pratt Bannatyne, one of the nation’s foremost authorities on the holiday, traced the evolution of Halloween from colonial times through its modern-day commercialism. Although the book contains many references to trick-or-treating practices across the United States, telling riddles never enters the equation.

The credit for providing Des Moines children with the perfect outlet for their most groan-inducing jokes largely goes to one woman, Kathryn Krieg, director of recreation for the Des Moines Playground Commission (later the Parks and Recreation Department) for 43 years.

When Krieg assumed her post in 1931, kids on Beggars’ Night were more likely to clamor “Soaps or Eats” than “Trick or Treat.” Every year the newspaper ran a long list on Nov. 1 of youths arrested the previous evening for crimes ranging from soaping windows and sidelining streetcars to setting fires and throwing bricks through windows.

They set aside Oct. 30 as Beggars’ Night and got the word out to the public that on that night – and only that night – children would be allowed to go from door to door and say the phrase “tricks for eats.” The council urged that “eats should be given only if such a ‘trick’ as a song, a poem, a stunt or a musical number, either solo or in group participation, is presented.”

The Beggars’ Night program was so successful that by the mid-1940’s, the number of Halloween police calls in Des Moines had been cut by more than half.

After the war, Krieg continued to issue annual bulletins in the Register laying still more Beggars’ Night ground rules, including that children should stay in their own neighborhoods and that parents should turn on their porch lights for trick-or-treaters and accompany small children on their rounds.

Each year, she reiterated that children should not be given candy until they earned it “with a stunt, song, or riddle.”

The joke-telling ritual continues, as does its legacy: Reduced vandalism. Instead of tales of marauding youth, the only Halloween-related story to appear in the Register last year was about a gathering of local witches.