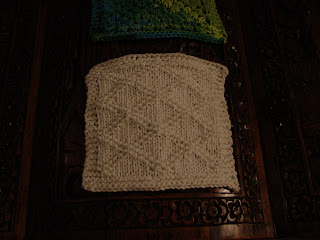 I knit my sister and sister-in-law each her own handmade dishcloth/potholder. One was a duplicate of the dishcloth I wrote about back in 2007. Mine has served me very well in it’s once a week rotation. I also made a solid white dishcloth. Since its color is solid, it shows a pattern very nicely. In this case, the pattern is the King Charles Brocade stitch — About.com has instructions. I found this historical tidbit at the jersey knitter blog:

The King Charles Brocade stitch pattern may be found in Barbara G. Walker’s A Treasury of Knitting Patterns. It’s one of several patterns in a beautifully knit blue silk vest (to modern eyes, a tunic) worn by King Charles I of England on the day of his execution in January 1649. (It’s bloodstained.) However unsuccessful he was as a sovereign, at the end Charles showed manly style, asking for warm clothes to ward off unseemly shivering: “The season is so sharp as probably may make me shake, which some observers may imagine proceeds from fear. I would have no such imputation.”