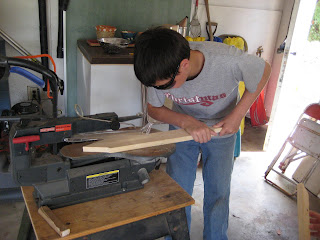 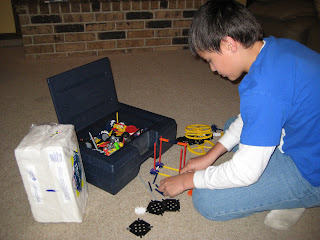 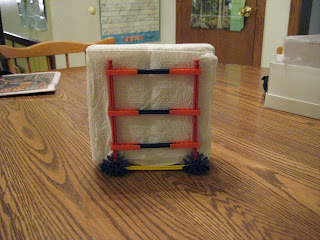 Grandpa gave the boys a scroll saw two years ago for Christmas. “G” complained this weekend that since it’s kept at Grandpa’s house, he never gets to use it. So it came to live at our garage on Saturday while Mr. GAIN was gone and I was in between meetings.

Since we’re still trying out the schedule, we’ve been light on school work. In an effort to keep people busy between my taxi service calls, I turned “G” to crafting his own toys. He chose to cut out a sword and a dagger from a leftover bluebird or bat house (cannot remember now) that the Great Ape Trust told me to make. The next week, I was told to not assemble or deliver it. So we had nice wood laying around.

While my business partner talked to me on the phone, “G’s” little sister insisted that he also cut the scrap wood into toys for her. I made some sandpaper blocks for the two kids to use after the cutting was done. I had to call the cutting off when the scraps got too small for my comfort. Mr. GAIN came home from playing ball soon after this, and was surprised to see a saw in our garage. LOL

Since Monday, I’ve been trying to get the paper napkin deal at Walgreen’s (500 napkins for $3). They were sold out on Sunday, but a new truck came overnight. When “G” was done with art class, he went to work on making a napkin holder for us out of K’nex. I first saw a K’nex napkin holder while at a Charlotte Mason meeting in Ankeny four years ago. Never forgot it. Since we have plenty of K’nex (I guess you can never have enough), it was no problem to donate a few for napkins.