I intend to work on the quilt Saturday, so I thought I would show a few of the ‘smelts’ that have been given to us over the years. I don’t think I’ll be taking any pictures because I want to get a lot of progress on the quilt. I haven’t worked on it this week. For any new readers, a ‘smelt’ is a gift that was handmade and given for Christmas in the McGuire tradition. The word was lifted from Victoria Jackson and Paul Simon’s Saturday Night Live Christmas on a Deserted Island skit. 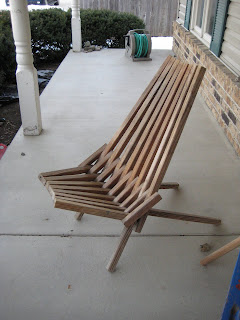 Here is a chair that Dave made for Mr. GAIN. It folds up quite a clever fashion. Made of 1 x 1’s. Very impressive because he had to travel from North Carolina to Iowa with it, or assemble it once he arrived here. Either way, long-distance gifts require extra brain work — whether you are giving a gift that someone has to haul back home or hauling a gift to give (assembling, pre-assembling, purchasing material upon arrival, etc.). You have to stretch your creativity to ensure a good idea for packing.

Here is a pen and pencil holder that Jeff made for me. 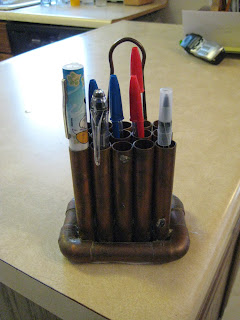 Soldered copper pipes. It originally had “an apple for the teacher” on the front since I’m a homeschool teacher. It was formed with copper wire and you can still see the little dot of solder from where it was attached. I added a piece of sticker-ized felt to the bottom so it wouldn’t scratch the counter and added a bean to each tube so the pens wouldn’t stick to the felt. We use it all the time. I don’t think it will wear out.

We also have a few lamps in the house. I’ve made a lamp to give away. They are pretty quick and easy to make. The ones that were given to us have a branch for the vertical post with a pipe for the horizontal arm. One is de-barked and the other is not. I couldn’t get a good photo of either the floor lamp or the tabletop lamp because we have too much stuff in the way to get a clear shot. Yes, we have junk to get rid of. A lot of junk. 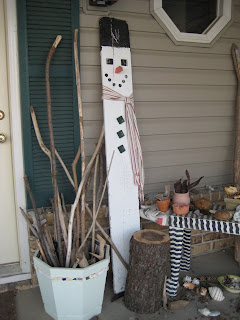 Lastly, we have a snowman. Donna and her husband recycled some boards from a fence to make a snowman for every family. Ours has gotten some wear since we received him. His hat has no brim left. But his scarf is still there and all of the buttons, too. A little chalk embellishment on the hat never hurt a snowman, either.

We have gotten a lot more handmade goods through smelting than I’ve shown here — an apron for the barbecue, a genuine cork board, and embellished flowerpots and photo frames are four items that I can think of right now. They are such a part of our every day lives that I have difficulty separating them from our conventional useful things. Now that I think about it, I feel wrong to not treasure the handmade more, since they were made with thought of the recipient. I’ll be considering this as I pass the weekend.