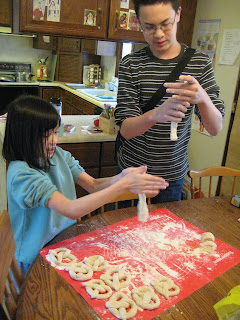 At least ten years ago, I would watch a show called “Donna’s Day.” She had great activity suggestions for kids roughly ages four through ten, including pretzel making. I decided soon after Ash Wednesday that this year I would remember to make pretzels and hot cross buns for Lent.

In my laziness (Why compose and type when you can copy and paste?), and my search for authoritative sources (On the internet? Yeah, right.), I was reading “The History of the Pretzel” here.

Here is the beginning of the text. Much more is at the website.

As early as 610AD at a monastery somewhere in Southern France or Northern Italy, where monks used scraps of dough and formed them into strips to represent a child’s arms folded in prayer. The three empty holes represented the Christian Trinity. The monks offered the warm, doughy bribe to children who had memorized their Bible verses and prayers. The monks called it a Pretiola, Latin for little reward. From there, the pretzel transformed into the Italian word, Brachiola, which means little arms. The Pretiola journeyed beyond the French and Italian wine regions, hiked the Alps, wandered through Austria, and crossed into Germany, where it became known as the Bretzel or Pretzel.

We used Donna’s recipe once ten years ago, and decided to use it again. Both times were very successful, so I deem it a consistently good recipe. I cannot find the recipe on her website, otherwise I would post it here. 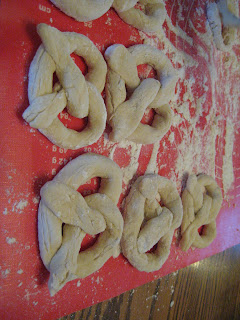 Maria, I centered the photo, but it is rotated. 🙁

After I made the dough and it rose, half of GAIN Academy and I worked the dough into pretzel shapes. It rested for ten minutes while a pot of water and baking soda heated up to a boil. We boiled the dough once the water was ready, then baked the dough. Here is our yummy final result. “G” of GAIN modified a cheap salt grinder (upper right corner) so we could use coarse, unground salt crystals for our pretzels. The longer pieces of dough were too large to fit well on our slotted spoons, so their shape is not as nice. But the taste was still good. 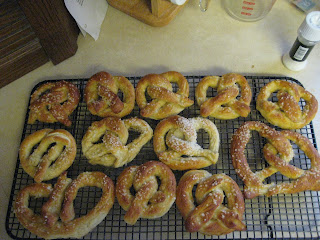