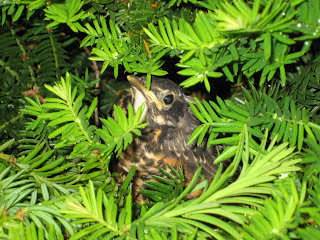 Yesterday I divided some hostas before the rain came (and stayed for hours). I walked to the side of the house to decide where the lilies of the valley would go once the plant exchange occurred. On my way back, I was startled by this little guy, a baby robin. The younger half of GAIN and I watched this young robin for a while. He (how do you tell the gender?) still had some downy feathers and a pretty short tail. If you enlarge the photo by clicking, you may see the “ear tuft,” which is down. We found downy feathers on his back and sides as well.

We read about the short tail in _Handbook of Nature Study_ and smirked as we watched him off and on for the next hour — he was obviously new to flying, but made it to the backyard. He did more sitting still than anything else. I enjoyed listening to the kids giggle and talk while they watched the backyard activities through their binoculars. And praised the Lord that they were not fighting.