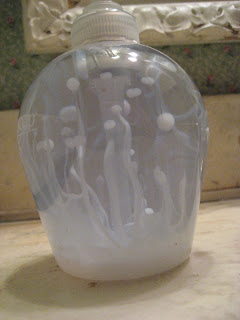 Today’s lesson is all about density.

My sixth graders learn this in science, but everyone is talking about it this week.

You see, yesterday, I saw that the soap was getting low in our container. It held just a little slanted layer of white pearly stuff. I squeezed some colorless refill on top of it. Don’t want to run out of soap after using the toilet! I left two very distinct layers in the container. A couple hours passed, and I walked into the powder room and saw this lava lamp thing on the left. Ah, density.

The clear soap must have a higher density than the white pearly soap.

When I woke up this morning, I just had to look again. Basically the same thing, but the “strings” are smaller. Here is what I saw: 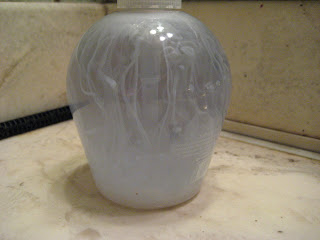 My older two totally know what’s going on. They’ve done labs about density. The younger two, not formally. We’ve never sat down and had the “density talk,” but now we will. Unless they already did with Mr. TellBlast. He does that sometimes. He’s very good at it. He ought to be a kids’ teacher.

Conveniently, my kids just watched Modern Marvels: 60’s Tech. Lava lamps were featured. Because of the way his brain has been fed, I think my third child has an inkling of density already. My youngest, not really. She plays a lot with density, but isn’t familiar with the term density.

And then there is the maturity of the younger two to take into account. They both want individual turns staring at the soap. They seriously fight over the soap. We’ll see what the container looks like tomorrow. Hopefully there won’t be any soap-viewing fights.