My first attempt at 2009 Christmas ornaments, inspired by linaloo (originally found at Sew,Mama,Sew). The Patchwork Star Tutorial lacks a template. I’m a smart enough gal to figure out that a five pointed star means that each point is 360 degrees / 5 points = 72 degrees. But I can’t freehand that kind of precision, even with a protractor. I tried. Not pretty. Linaloo must be a genius.

So I had to look for help. I had success finding a template after a long hunt. Sort of. I started by visiting the fabric store. All I could find were 60 degree and 45 degree diamond templates. I needed a diamond with a 72 degree corner. I tried making lines on linaloo’s photos with Macromedia Fireworks and printing the resulting diamond, but got a messy, uneven shape that did not sew up well. I decided to use many different search terms with Google (doesn’t Google have everything?), and finally found results for what I desired with the term “online protractor.” Basically, there are no templates for 72 degree diamonds. Quilters like things nice and square (for square blocks), and 72 degrees doesn’t fit the mold. I will show you how to make a template for yourself now.

If you click on the link (here if you missed it in the previous sentence), you see a chart. What now? How did diamonds come out of a protractor graph? I’ll explain, because if you can figure this out, you can do many things with it. Very liberating. I tried doing this on my own with a protractor, but the chart gives precision that quilters (and the very exacting among us) need.

How to make a diamond template for a five pointed star

1) Print out the chart. Draw a line from the origin along the 0 degree line to the right or left. Not both sides of the origin, just one side. I chose right. 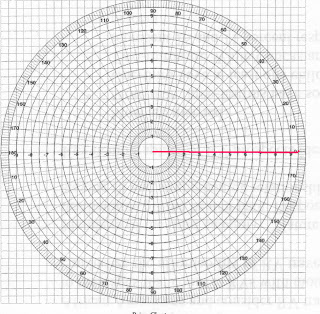 2) Measure 72 degrees counterclockwise. Draw a line from the origin to the 72 degrees mark around the perimeter. 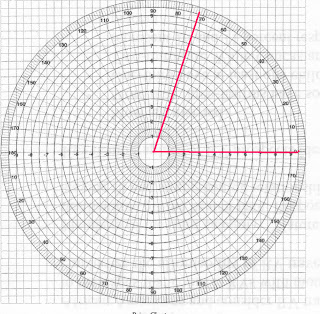 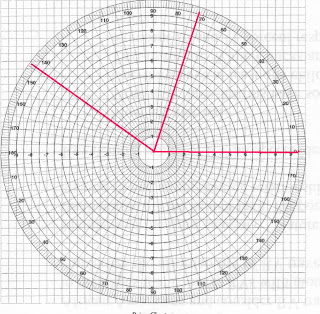 4) For the angles below the zero degree line, take 180 degrees – 72 degrees = 108 degrees. Measure from that first line clockwise, and draw a line from the origin to the mark around the perimeter. 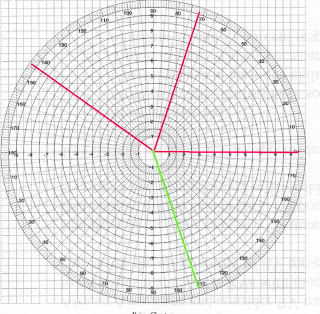 5) Repeat: 108 degrees – 72 degrees = 36 degrees. Move clockwise; draw your line. You should have a star with five rays leaving the origin/center point of the chart. 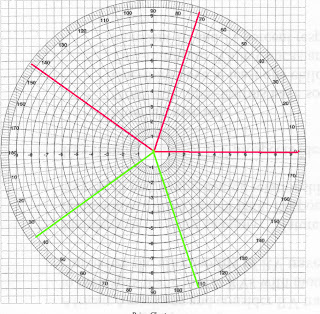 6) Decide how large you want your diamond by eyeing the grid in the background and along the horizontal and vertical axes.

7) Tape your chart with the five rays to a window or light table. Using a sheet of clean paper, you will now make your template.

8) Place a straight edge of your paper along the x-axis (right hand side of the origin or center, the first line you drew). 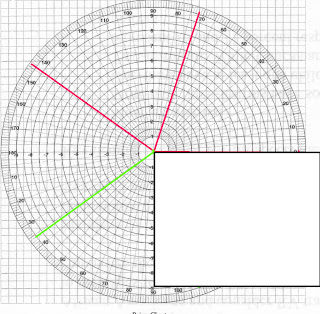 9) Trace one of the adjacent lines that you made onto the template. I choose the one below. 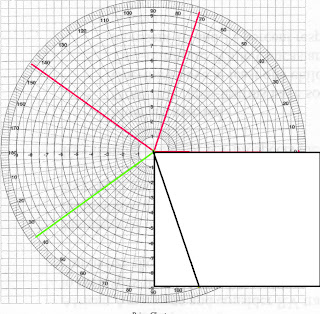 10) Remember how large you wanted your diamond according to the units along the axes? Mark that length with a dot on your line (I made them light blue for you) and your edge. I used 6.5 units long. This is one half of your diamond (the center point, or the outer point, depending on how you look at it). 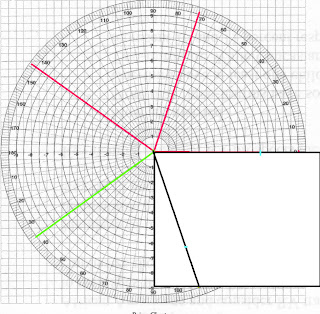 11) Rotate the template 180 degrees. Line the dots up to the same length (mine was 6.5) along the same lines (the edge and 108 degrees). Trace those lines to complete your diamond (rhombus). My Fireworks skills end here, so no image. I don’t know how to group and rotate the layers with Fireworks. But I think you get the idea.

12) Is the shape long or short enough? If needed, mark a new set of dots, then flip your paper to complete the shape.

13) Once the shape is the right size, cut it out. Label it. I laid mine on top of two layers of fabric, set my ruler on top and used my rotary cutter. (New blades rule! especially when purchased with a coupon.)

My findings: Without buying software or acrylic tools at the fabric store, I very successfully created a precision shape using my smart brain and a nifty online prism/protractor. Once I found the chart (I heart you, Laramy-K!), the template and construction of the ornament went fairly quick. If I’m more careful with my stitching next time, I’ll have a gift-worthy ornament.

Here is my test ornament. It’s kind of cute in camo, crookedness and all. 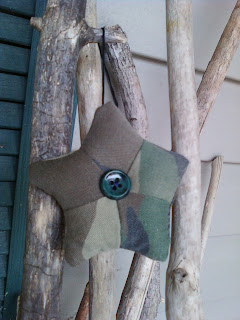