My son’s art teacher said that “G of GAIN” was the best stitcher she’s seen and that I must have taught him how to sew. She showed me the standard large 1/2″ running stitch of other 6th graders, no backstitching, then showed me G’s work.\ with neat, small, tightly-spaced whip stitches. He made “regular clothing” for a wire sculpture person — a shirt, pants, and hat.

I did not teach him how to hand stitch. I made the materials available and let him have time to figure out the best way to use them. I didn’t teach him to use a whip stitch or a running stitch, either. He determined that on his own. 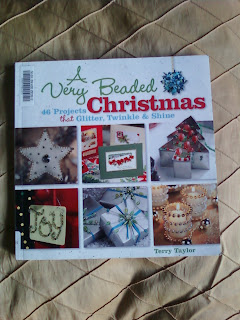 I would say that my crafting has evolved the same way as G’s sewing skills — self-learned.

Today, in addition to three blocks of the crazy quilt, I scanned through this beading book today. I can’t say that I’ve done any beading outside of knitted jewelry such as this attempt and a few bracelets (pattern purchased from Donna’s, a store in Valley Junction that is now closed). I found this book at the library. It has instructions for some nice felt ornaments that remind me of my young childhood. I received just one felt ornament after my teenage years. I will probably do some prototypes to determine the cost with respect to difficulty and time. The use of beads puts the ornaments on a higher level than those without, and I’m looking forward to trying something new.